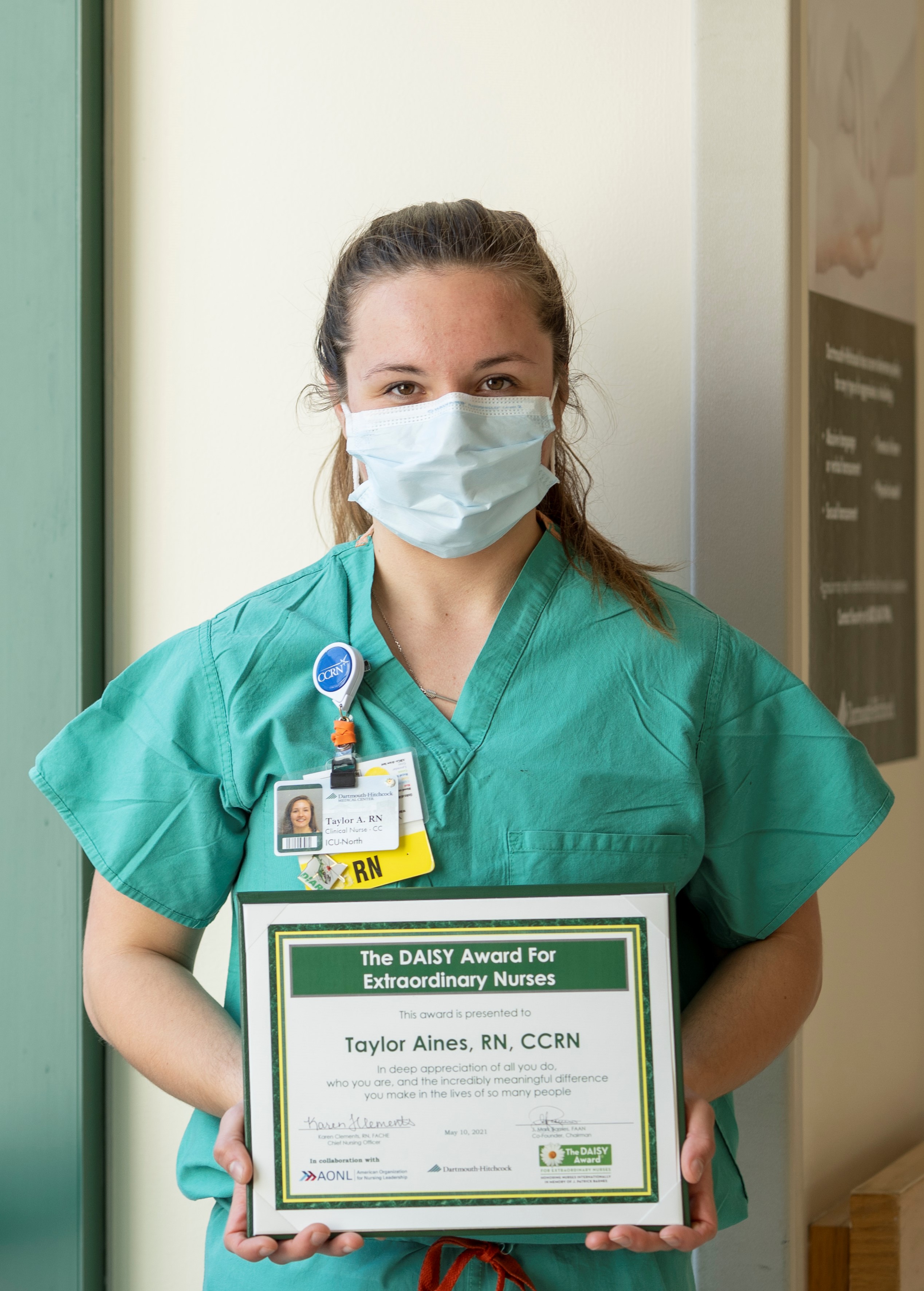 Medical Intensive Care Unit
Dartmouth-Hitchcock Medical Center
Taylor was attentive, incredibly helpful, and supportive
My 25-year-old niece, C, passed away in 2019 from complications due to cystic fibrosis. I was her health care proxy and she was like a daughter to me. I struggled with how I would know when the time would be right to end her care as she entrusted me to do for her.
On the day C passed away, I showed up early in the morning to the ICU having heard from the night nurse that C had been mostly unresponsive the previous night. I met Taylor Aines in the hallway. She was C's assigned nurse for the day and I cannot imagine how much worse this day would have been for my family and me if Taylor had not been the one to guide us through the horror of what the day would bring.
I knew immediately that Taylor was someone full of empathy and expertise. I asked her straight out, "Is today the day? Could today be the day I decide she's had enough?" She said, "It could be. I will have the doctors round on C's room first, so you can talk to them as soon as possible," and Taylor made that happen. She stood right next to me as I talked with the team of doctors and made the emotional and difficult decision that it was time to end C's suffering.
Taylor was attentive, incredibly helpful, and supportive. She offered her assistance in so many different ways and guided me through so many unpleasant tasks that had to be done. She did this all while making sure C remained her priority. She was caring and compassionate with her care of C. Making sure the medications were given as directed to ensure she was comfortable, changing her hospital gown and bedding when necessary throughout the day, and she always asked me before she did anything to make sure that it was what I wanted.
At one point, my family and I were around C's bed just talking to her and each other. C was still in and out a bit at that point and I turned around and was crying. Taylor was right there with tears in her eyes as well and she hugged me. Then she apologized and said, "I'm sorry. I've never cried at work before like this." but I told her that I was so grateful to her that she did. I told her that it was comforting to me that she was just not in that room acting clinically.
C was only 25-years-old, she has a young son that she knew she was leaving behind. This was all a horrible and sad tragedy. Taylor saw C as a person and as a young mom. She felt all the same emotions as us, and this gave me some of the strength and courage I needed to carry out C’s wishes.
C went to Dartmouth-Hitchcock Medical Center for most of her life and always loved her nurses. When it was time for all of us to say our individual goodbyes, I walked in to C's room alone. I immediately noticed that Taylor had loosened C's hair from her ponytail and fanned her long, beautiful, blonde hair out on the pillow. That was such a caring gesture on Taylor’s part and I was blown away by it. C was a beautiful young woman and she loved her hair. Our best girl's- day-outs were when I would take her to get her hair colored and cut. C would have loved that Taylor took the time to brush her hair and make her look as beautiful as she truly was. In that moment, C looked more to me like herself than she had in a long time which is exactly what I needed to get through saying my goodbye.
When it was time to take C off the trach, Taylor was there with medications and never left her side or ours. C's worst fear was that she would be in pain when the tube was removed which was my worst fear as well. I felt so confident in Taylor though, she was so good at her job. I had full confidence that she would help my niece die as peacefully as possible, which allowed me to be in the moment with her.
Afterward, we stepped out of the room and Taylor told us we could stay around as long as we needed. When we came back into the room, Taylor had positioned C in a comfortable position and had smoothed her blankets over her. She looked like an angel. Leaving that room, and the hospital, and Taylor that night was almost the worst part of it all. But, knowing I was leaving C in Taylor's care gave me some peace and comfort.
Less than a week later, I received a letter in the mail from Taylor. Taylor gave me such a gift with her words. Hearing that she took such good care of my beautiful C after I left is a gift that only she could give me. Knowing that she in essence also mourned for C that day, and since, validated for me that C's spirit transcended her physical body. Taylor validated for C and all of us that she was a bright light in this world and that her death was a loss for all who came in contact with her.
I feel like Taylor is one of the most important connections to C that I have in my life. There are many, many wonderful nurses at DHMC, I know so many of them because I spent almost as much time up there as C did over the past 25 years. But Taylor is extraordinary as a nurse and as a human being. I needed a compassionate soul that day, not just a qualified nurse. I was lucky to get both in Taylor.
Taylor
, view your benefits
Print
Taylor
's Spotlight