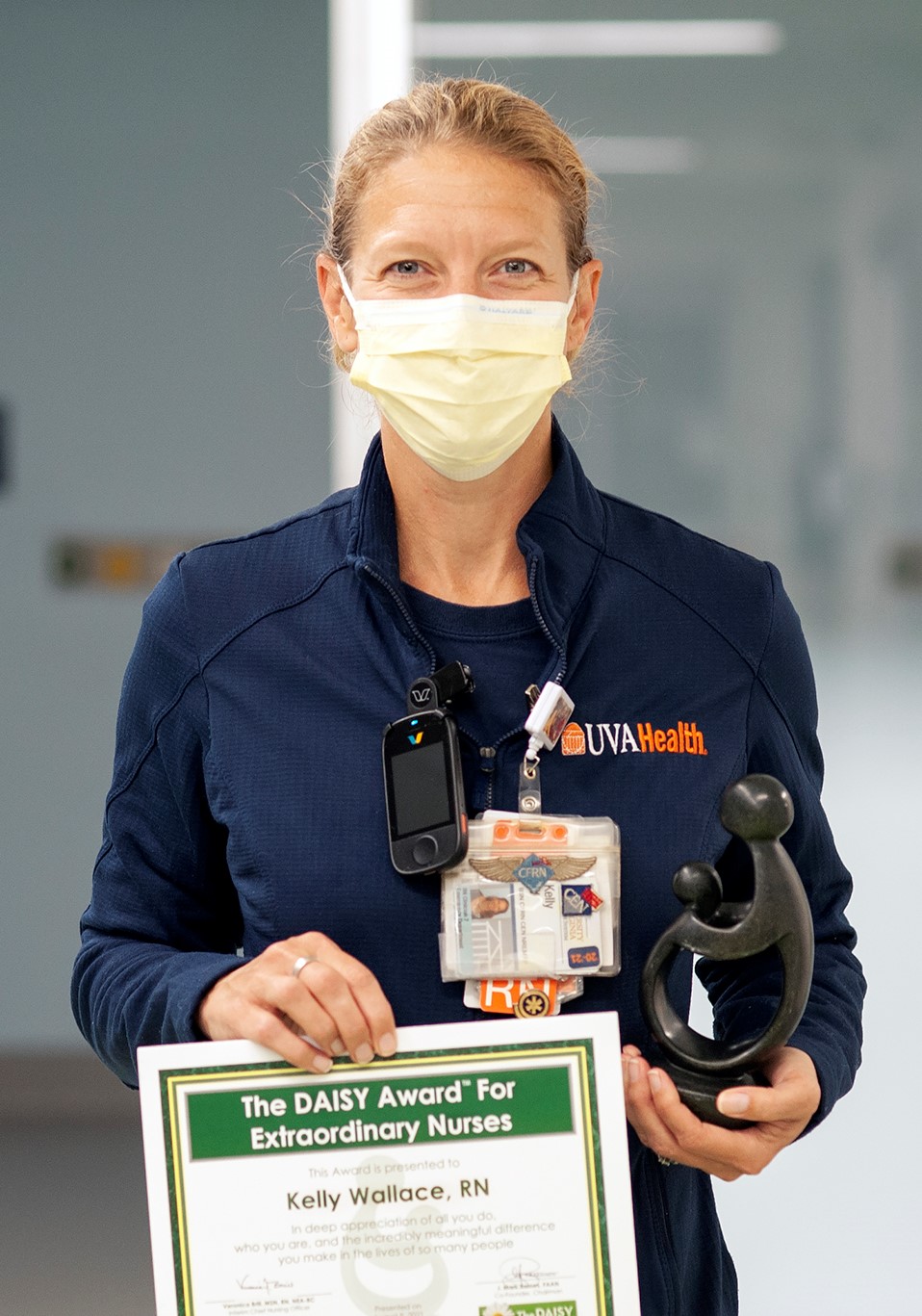 Emergency Department
UVA Health
Charlottesville
,
VA
United States
Her tone and body language were simultaneously serious and reassuring. From the moment we met Ms. Wallace, she empowered our son to participate in the process of his own care.
I am writing to bring your attention to the outstanding care our family recently received from Kelly Wallace when our five-year-old son was scratched by a dog. Ms. Wallace has the most effective pediatric bedside manner of any healthcare worker I have ever met. I say this as a parent of two boys (ages 5 & 8) who have received a moderate amount of medical attention among them: 4 minor surgeries, 3 minor ER visits. I also say this as a former EMT and premedical student who has spent some time in hospital and emergency settings.

When our son was scratched by our neighbor's dog we realized he would need stitches on his left ear. While the bleeding was controlled quickly, cartilage was plainly visible. We went to Martha Jefferson, thinking it would be quiet and quick. The attending physician there drew our attention to a seemingly superficial scratch on the neck below the ear. She calmly explained her concern about potential damage to the carotid artery. She recommended an IV and transportation via ambulance to UVA. Upon arriving at UVA, our son was fairly shellshocked. Kelly got right on his eye level, used his name, and asked if he felt scared. Her tone and body language were simultaneously serious and reassuring. From the moment we met Ms. Wallace, she empowered our son to participate in the process of his own care. She even involved him in tasks like connecting the pulse-oximeter and securing the Velcro of the BP cuff. These were more than mere distractions. These small actions helped our son feel in control during a very scary situation.

At the end of the day, the doctor supervised conscious sedation during which he and a resident closed the wound on the ear and assessed the wound on the neck which was mercifully superficial and did not compromise any underlying vasculature. When it was time to get ready to go home, Ms. Wallace continued to involve our son in the experience. With her guidance, he disconnected and peeled things. Ms. Wallace asked him, "tell me one good thing that happened here today." He answered: "I get to go home now!" With a light chuckle, Ms. Wallace said, "I'll take it!" We left around 7 pm with a very tired, but very healthy, little boy.

We are no strangers to UVA hospital, but everything looks different when you are there with your own kid in the ER. On that day when we waited for the specialists to arrive, I took a quick break in the courtyard by the cafeteria. It was the same place where I had sat so many times, yet it was wholly different as I wondered about his carotid artery. I looked at a bright blue sky through the Ginko leaves like I had never seen sunlight before.

In this letter, I've focused on Ms. Wallace's pediatric bedside manner. I would be remiss if I didn't mention her unique ability to communicate effectively on many different levels. I didn't tell her that I or my husband have biomedical backgrounds, but when I asked a question about the antibiotics being administered, she must have picked up on something I said because she mentioned some details about beta-lactam drugs. It was like she intuited my need for some specific information, for something I could focus on like small penam molecules. Ms. Wallace is positive, smart, experienced, confident, and kind. She saw our family through a hard day that felt like it could have had a thousand outcomes. We all need healthcare in our lives. As Sontag wrote, every person holds dual citizenship when it comes to health and illness. Because of Ms. Wallace's care, our son had a positive experience with healthcare. That is a gift that Ms. Wallace offers through her incredible work. And this, we all know now more than ever, is hard work. She excels at her job. She shines brightly in her workplace. We are so grateful that she was there for us on that day.
Kelly E
, view your benefits
Print
Kelly E
's Spotlight