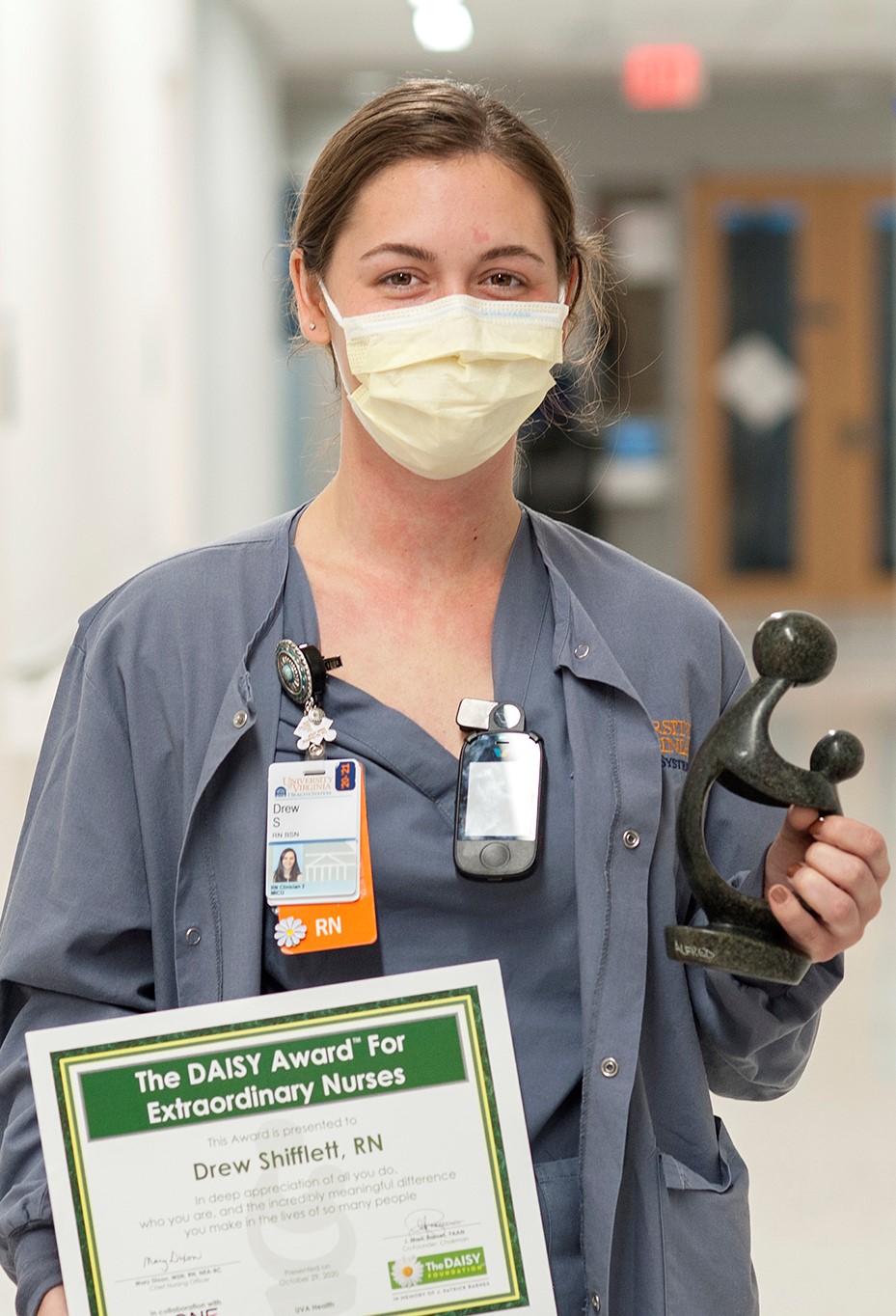 Medical ICU
University of Virginia Health
Drew taped large printed hearts on the window of the patient's room so that they would know which room was his.
Drew far exceeds any definition of an exemplary nurse. She was faced with an extremely difficult situation on the COVID ICU which she handled with tremendous poise. As a visitor to the MICU, on several occasions as a don/doff coach, I was very aware of the extraordinary nursing care that takes place but this particular day went above and beyond anything I have witnessed in my, almost, four years of ICU nursing.
When Drew realized that her patient was rapidly decompensating and nearing the end of his life, she was able to coordinate with many parties while doing everything in her power to keep the patient alive while a plan was made, to allow for a dignified dying experience for her patient and a calm, supportive atmosphere for their family. All while in a very abnormal environment.
Within a matter of three hours, Drew had contacted the family members, had the chaplain called to the bedside with a catholic priest en route. Once the priest arrived, Drew FaceTimed the family who were on their way to allow them to be "present" for the patient's last rites and anointment. She, quite literally, rearranged the room by moving the couch, the IV pole, the bed, and monitor to allow for the most visibility for the patient's family. She was able to get permission from management for two of the patient's family members to come to the bedside.
The other family members were not left out though. Drew instructed the remaining family to park on the top level of the South Street parking garage on the far left side and stand outside of their vehicle. She taped large printed hearts on the window of the patient's room so that they would know which room was his. At this point, she had moved the patient's bed so that he was facing out the window in their direction. The two family members were escorted to the bedside by Drew who also helped them don the proper PPE. Not only was she titrating drugs, ensuring the family's comfort, and setting up the call with the family outside, she was also anticipating many needs before anyone even knew they needed them.
As the team moved the patient to comfort care and later pronounced his time of death, she continued to go above and beyond. She personally held the daughter of the patient on the bed as she sobbed the grief of watching her dad die. She unhurriedly helped the family members doff their PPE and personally packed the patient's belongings along with gloves and bleach wipes for the family when they arrived home. To follow, she escorted the two family members downstairs and developed a plan for the "last goodbye".
Once the family all reunited on the top of the parking garage, they waved goodbye and blew kisses. This was the sign they had all planned. Drew waved back and shut the blinds to the patient room and proceeded with attentive, respectful, and honorable post-mortem care. Drew made one HORRIBLE day for this family bearable with her diligence, thoughtfulness, and grace.
Drew
, view your benefits
Print
Drew
's Spotlight