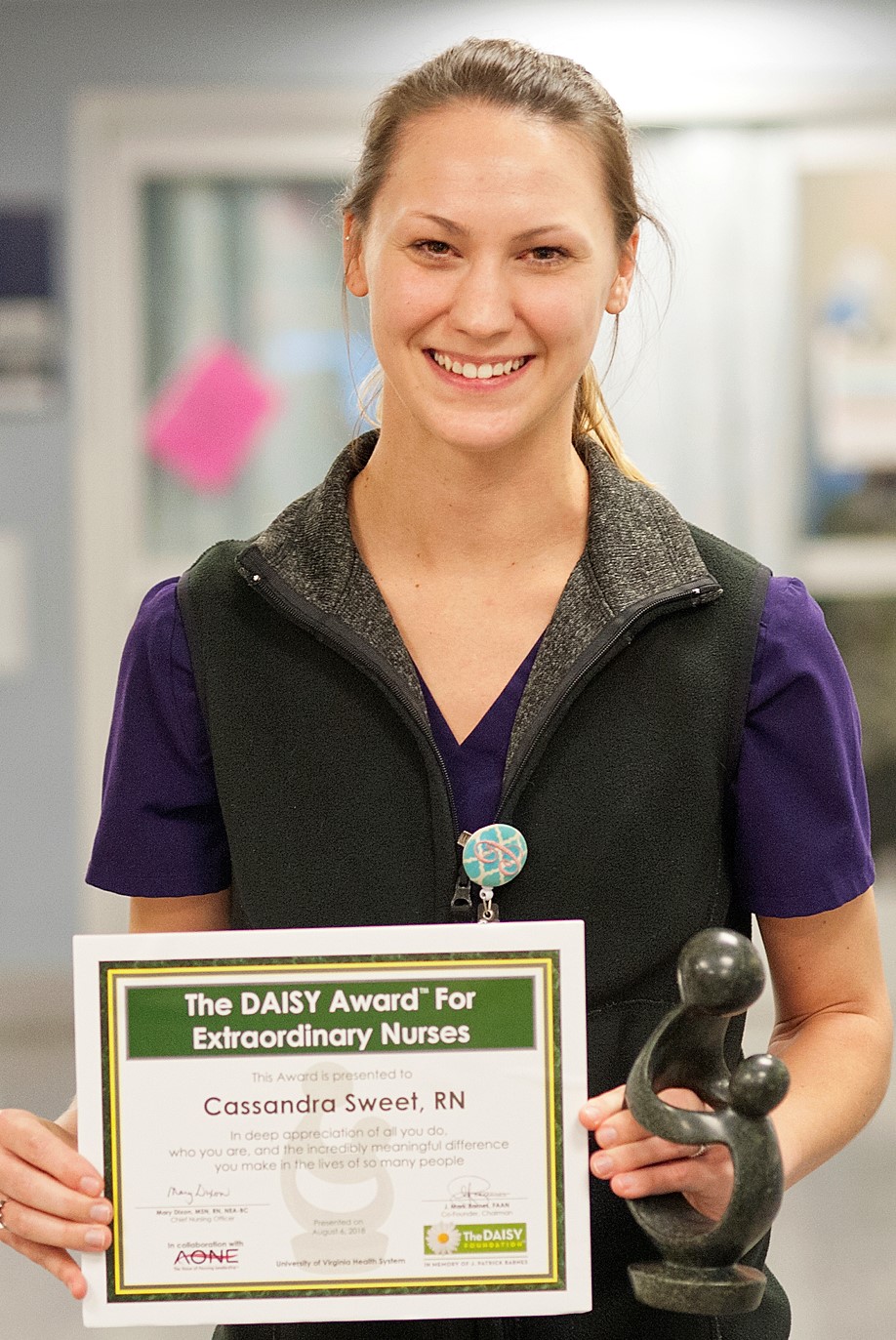 Medical Intensive Care Unit
University of Virginia Health System
Charlottesville
,
VA
United States
On one particular day, Casey made all the difference for one patient and his family.
Upon arriving to work, Casey's assignment included on elderly gentleman recently admitted to the MICU, Mr. P. His illness was already complex and would require several significant invasive interventions without a guaranteed positive result, and possibly a significant change in his quality of life. Casey's introductions to Mr. P was soon after these discussions. As Casey further discussed details with Mr. P and his wife, Mr. P made it clear his life was his family and his farm. If his life would not be the same, he did not want to pursue such interventions. "If I can't bail my hay, I just want to go home." Casey recognized the need for further goals of care discussions and assisted the coordination of another family meeting with his medical team. Following this meeting, Mr. P was made a DNAR-C. Casey remained supportive and assisted the wife to call in the family. By late morning, he was surrounded by his wife, two sons, and his daughter.
Casey spent time talking with his family and Mr. P, who again expressed his wishes to go home. This is when Casey began planning for this option to happen.
After discussing the option to transfer Mr. P home to be with his family at his farm under Hospice Care, the medical team identified several obstacles. Primarily, his current critical state, a Hospice team would have to accept Mr. P, and he would have to be professionally transferred home. The family was supportive of his wishes to go home and was actively engaged in planning with Casey to have all options discussed. The medical team placed a referral for Hospice Care.
A Hospice liaison arrived about noon and coordinated with Mr. P, his family, and Casey. Equipment was to arrive at their home by 3 pm and he was to arrive by 5 pm. Approximately, 2 pm, the family went home to receive equipment and set up for his arrival. Mr. P was rapidly declining. He expressed his love for his family before they left and his wife remained at his bedside. Mr. P slipped into an unconscious state knowing his plan to go home and his last loving words to his family.
Casey spent time emotionally supporting and discussing the care of Mr. P at home. Mrs. P asked difficult questions of Casey including how to give his medicines? How to dissolve meds under his tongue? What if he turns a funny color? Who do I call if he is not moving? And, reviewing resource numbers if needed. Casey also educated Mrs. P on the signs and symptoms of what to expect at the end of life including sounds, respirations, and comforting options. Casey demonstrated exceptional compassion and grace for Mr. P and his family during this time.
After 3 pm, the family called from the farm and inquired about the equipment that had not arrived. Casey began investigating. First contacting Hospice. Casey then received the unfortunate news, Hospice did not accept Mr. P due to high risk of death in transport. Casey was there to support the family when they heard the news. Although he remained in an unconscious state, his family was still wanting to get him home as he wished.
Not deterred, and now nearly 4:30 pm, Casey and the medical team contacted a second Hospice company who came to evaluate Mr. P. Hospice of the Piedmont did accept the patient and arranged delivery of equipment to arrive at his home within an hour including a hospital bed, oxygen concentrator and oxygen.
At 5 pm Case Management began coordinating transport home. Transportation was arranged for 8 pm. Hospice of the Piedmont and the transport team discussed the risk of transporting the patient home. Mr. P was currently supported on intravenous blood pressure medicine. This medicine can't be continued while transporting home per legal guidelines. Casey and the medical team discussed a plan to discontinue his intravenous blood pressure support and provide additional medication in pill form (via gastric tube). Hospice of the Piedmont, the transportation services, Casey, the medical team and Mr. P's family all willingly accepted the plan.
Some family had arrived back in the unit to be with Mr. and Mrs. P. Casey kept the family updated of each step and each change. At one point, Mr. P's (adult) grandson asked Casey, "How are we going to fix his blood pressure at home?" Casey calmly explained that these steps are Mr. P's wishes, and what they are doing is supporting him. His grandson broke down realizing this means his grandfather will die.
Casey remained supportive of Mr. P and his entire family, providing excellence in caring through her practice. Emotionally supporting through extraordinary acts of compassion.
At the end of Casey's shift, she had successfully assisted in identifying her patient's wishes, supported the family to fulfill those wishes through what should have been insurmountable obstacles, and arranged transportation back home to Mr. P's farm to be in the presence of his family for the end of his life. Casey reported off to the oncoming shift, tearfully saying goodbye.
Mr. P and his wife road together during the transport home. He was safely received by family and the Hospice of the Piedmont staff. Mr. P spent his last night at home, on his farm with family. Hospice of the Piedmont nurses returned to the MICU the next evening to inform the MICU Mr. P passed away peacefully that next morning. And, the family, specifically Mrs. P was grateful for all those who assisted in supporting Mr. P's wishes, especially Casey.
Thank you, Casey, for your exceptional care and compassion and for all you do for your patients every day.
Cassandra
, view your benefits
Print
Cassandra
's Spotlight