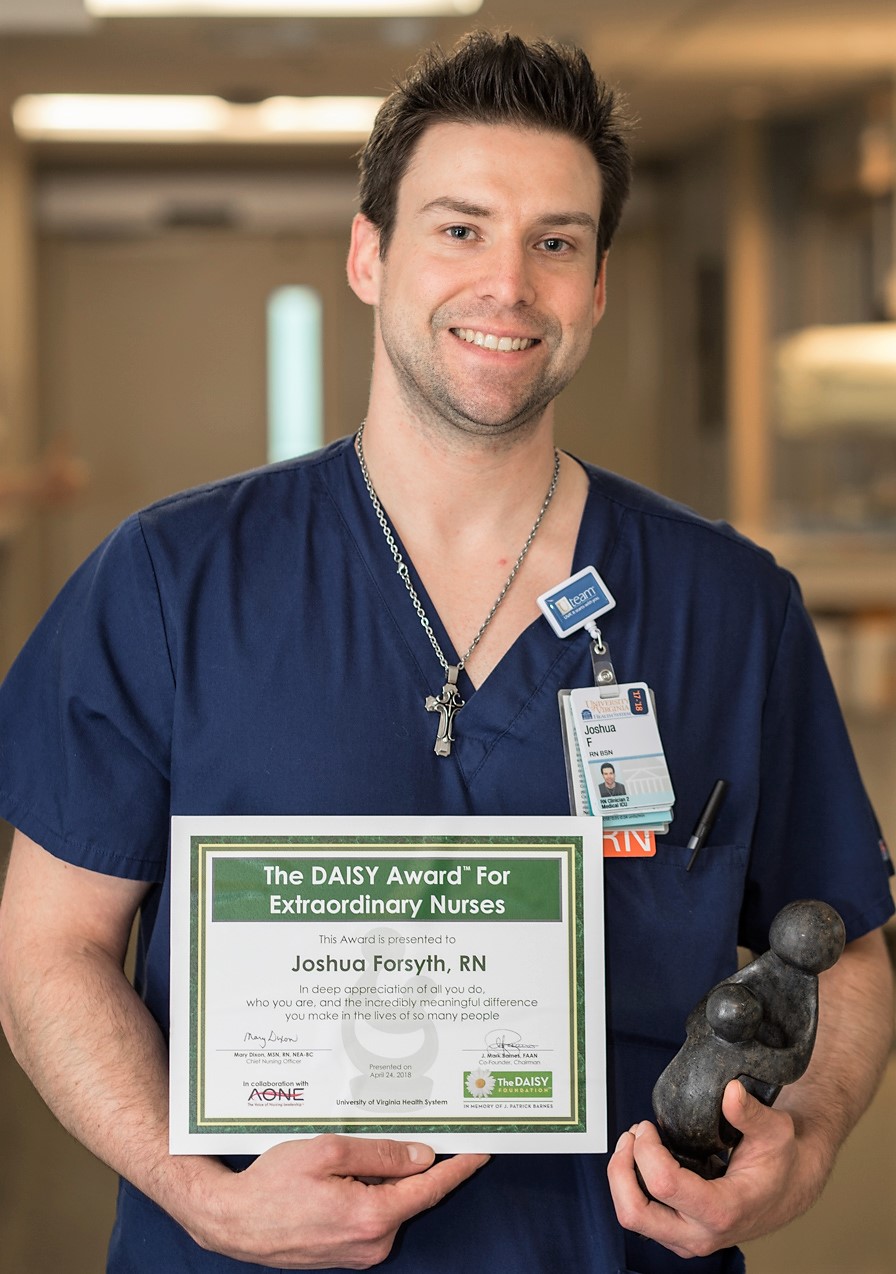 Medical Intensive Care Unit
University of Virginia Health System
Charlottesville
,
VA
United States
I want to acknowledge Josh's consistently excellent clinical nursing and compassionate care. During this particular patient's hospital stay, we were in daily contact with the patient's parents through Leadership Rounding and received daily feedback on his quality of care. Our patient was a young man with chronic congenital conditions that were complicated by sepsis with multi-organ failure. His parents, who had lovingly cared for him since birth, were understandably anxious and hyper-vigilant. This created an additional challenge for the staff who provided the complex care that R required. The night that Josh assumed care of R, the pair bonded immediately. Although R was non-verbal at baseline with a cognitive age of four, his parents were amazed at how he recognized, responded and interacted with Josh from the very beginning. R's parents said, "Josh is more in-tuned with R than most of his own family members."
After the first night as R's nurse, his parents formally requested Josh to be his nurse whenever scheduled. Although this was a difficult and often tense assignment, Josh joyfully agreed to accept it. During Leadership Rounds, R's parents told us that they loved Josh because "he sees our son in the bed, not just some patient." Josh soon found the perfect ways to communicate and comfort R including gently rubbing the top of his head, playing his favorite songs, and often just talking to him. Over the next few weeks, despite the efforts of the entire MICU Team. R's condition worsened, and Josh's nights were filled with harrowing trips to CT Scan, high fevers, seizures and endless hours at R's bedside. Josh supported and encouraged R's parents through the entire ordeal, and when it became obvious that R was not going to survive, Josh focused on providing R and his family with a painless, peaceful, beautiful death. R's parents often referred to Josh as their "Lifeline" and their "Rock" and expressed to us that "we don't know how we would have gotten through this without him."
Josh's dedication to R's family did not end on the day that R passed away. A few days later, after working four-night shifts in a row, Josh raced home, showered, changed, and attended the funeral. He stayed with R's family at the graveside and celebrated the life of a beautiful soul. Every day during Leadership Rounds, R's family repeatedly expressed their gratitude for Josh's generosity, kindness, patience, and compassion. Josh is an exemplary nurse and a beloved team member, but more importantly, he is an exceptional person. Thank you, Josh, for your dedication and devotion to all the MICU patients.
***
Josh gives excellent care to his patients. He knows when my husband needs something before he has time to ring for help or assistance. He knows the best way to give assistance and he is always so willing to go above and beyond to make sure his patients are comfortable. He is friendly, professional and a pleasure to know. His hard work has been noticed and it is so appreciated!
Joshua
, view your benefits
Print
Joshua
's Spotlight