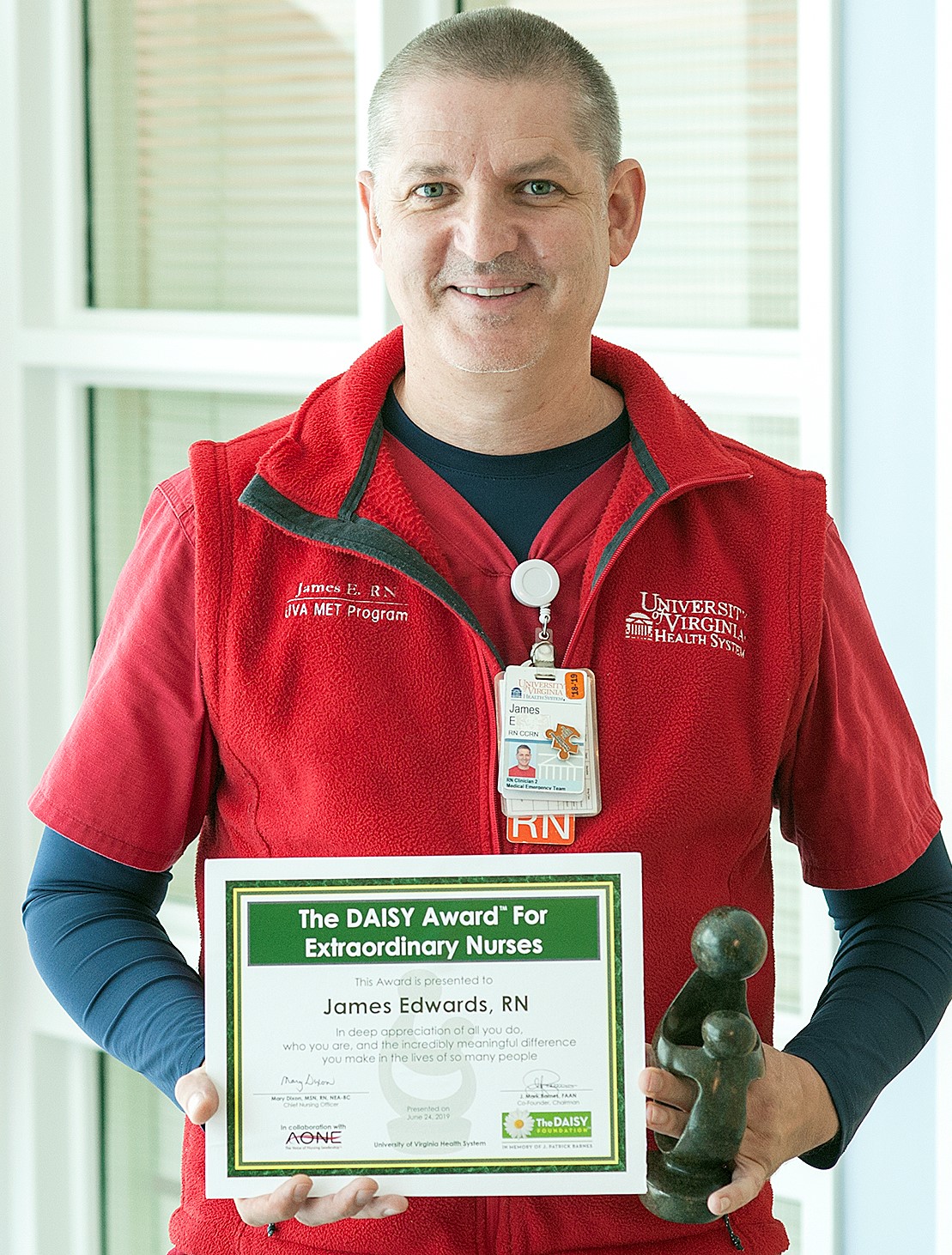 Medical Emergency Team
University of Virginia Health System
Charlottesville
,
VA
United States
While on a call to Labor and Delivery with James we encountered a young lady who was roughly 36 weeks pregnant. We were called for an alarming ventricular heart rhythm which at the time was identified as life-threatening. On our arrival, the team was there and was considering electrical cardioversion, a painful and scary treatment that would help fix the rhythm. James immediately began treating the patient, checked her vitals and performed his role as efficiently as he always does. Once the two of us realized that she was out of immediate danger we were able to slow down and assess the situation better.
This young lady wasn't alone in her room with her medical team, she had her husband and three-year-old son present who were also unsure of what was happening. As it was late in night shift, around 11:30 or so, the young boy was well past his bedtime and was a ball of pent up energy- jumping around on the couch in the room and constantly wanting to climb on his mom's bed, dad, etc. Her husband was nervous and trying to figure out what was happening to his wife and unborn child while simultaneously needing to wrangle their son in order to let her team take care of his wife. While myself and the medical team were caring for our patient, James took a few minutes and stopped to entertain the three-year-old son long enough for the husband to step out of the room with the attending, get an update on her condition and have some time to comfort his wife.
James helped the little boy get some chips from their room, he sat and talked with him playfully on the couch and picked him up and walked around with him for a short while- allowing the husband time to take care of himself and his wife. Ultimately the OB team decided that she would need an emergent C-section and we prepared to transfer her down to the operating room where she would be away from her husband as he would have to miss the birth. Through this stage, James would step away from the patient and intermittently entertain the little boy, doing a great job of making sure he wasn't interfering with his mom's care while still making the boy feel like he was 'part of the action' and not being left on the couch. The father had a couple of friends coming to pick up the boy but since this was all sprung on them suddenly they were coming from over an hour away and he didn't have time to wait for them. James' help with the little boy gave the father time to spend with his wife throughout this period of waiting.
Once the OR was ready to bring her down for her C-section, we started transporting her down to the waiting area to prepare for her delivery. As we were leaving, James offered for the father and son to come with us for as far as they were able to. They accompanied us in the elevator, the little boy already had taken to James and so he was playing with him most of the way downstairs. We got to the holding area and James sat down with the boy and entertained him some more, showing him a saline flush and letting him play with his stethoscope. The father brought the little boy over to say goodbye to his mom for the time being and then James went back to playing with the boy so the husband was able to say goodbye to her as well. After we walked the husband back to the elevator to wait for his wife he was incredibly appreciative of our help. He thanked James and me several times and went on his way to wait for news of his wife and new child.
James' actions may have seemed trivial to some in that moment, but what he did gave comfort to a tired young boy in a scary situation as well as provided relief for the mother and father so that they could focus on the severity of her present situation. It was evident that James recognized this gap on his own, took measures into his own hand as if it was second nature and did so in a compassionate and caring fashion. He treated the boy as if he was James' own son with a gentle nature and playful spirit. While it may have slipped less noticed to those closest to the situation, the mother and father, it certainly wasn't lost on me. It was warming to see one of my colleagues, someone who is always cool under constant pressure and a very capable nurse, bring his fatherly instincts into the workplace and provide another area of expertise into our working environment. It put a smile on my face to see his actions improve the experience of a scared young family without even phasing James in the slightest. James' actions, while likely unknown to him, were above and beyond what is expected of him, even late at night in the midst of a high-stress scenario. It is refreshing to see such compassion shine through with such nuance in an environment where we rarely see these kinds of actions. I count myself fortunate to be a witness to James' actions that night and to continue to work beside him as a friend and colleague.
James
, view your benefits
Print
James
's Spotlight