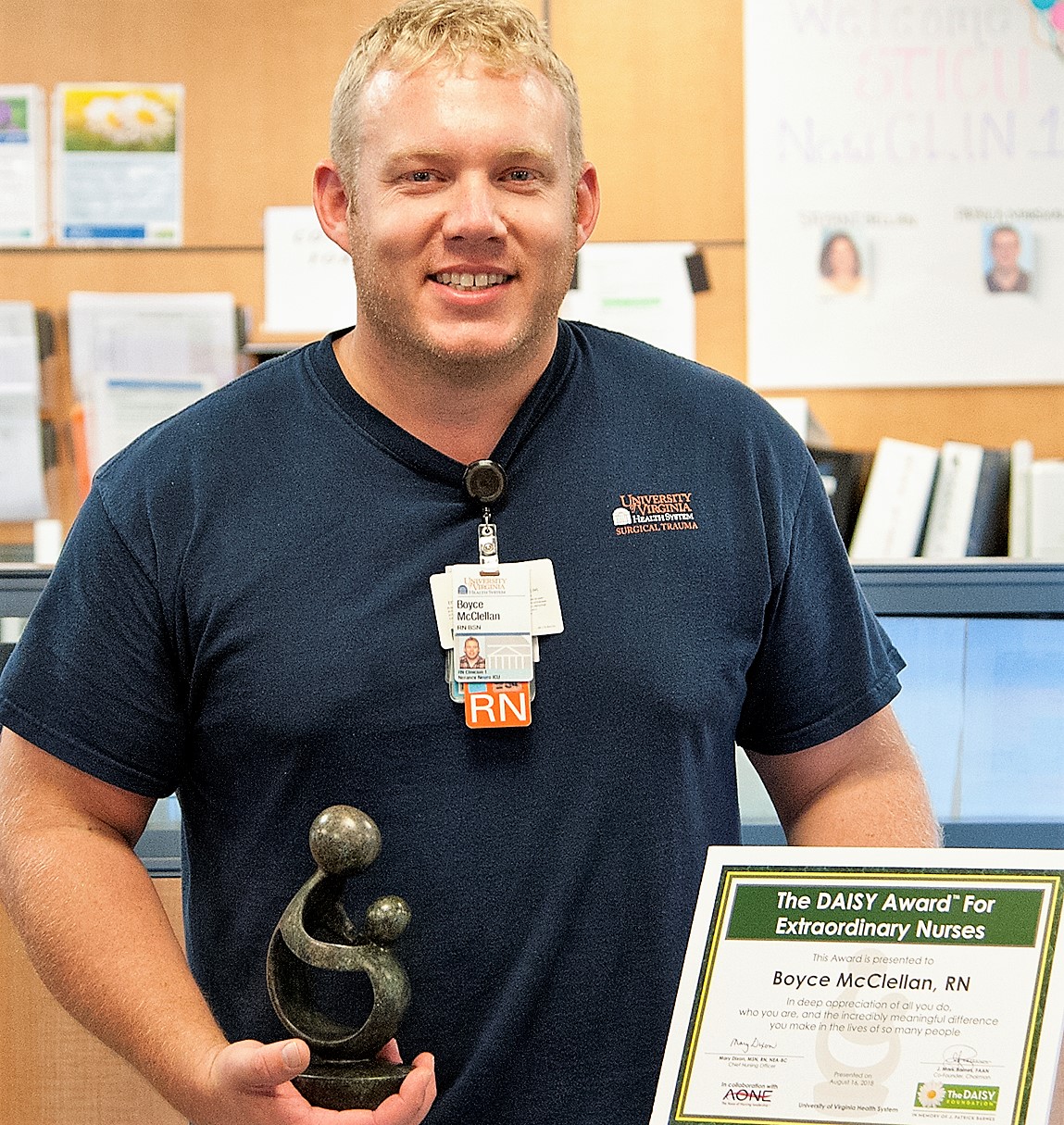 Surgical Trauma Burn Intensive Care Unit
University of Virginia Health System
Charlottesville
,
VA
United States
Boyce McClellan took care of a dear friend of mine, L, this past week after a fall that ultimately left my friend with a life-ending traumatic brain injury. In conversation with the family, Boyce was informed that L was retired Navy. Boyce went above and beyond to keep L alive until all the family could arrive from out of town to say their goodbyes, bringing him back twice.
After L had passed, Boyce played the Navy hymn before removing L's body from the ICU. This meant more to the family than you will ever know. His wife is also eternally grateful for giving her the EKG strip that had her husband's last heartbeat on it. She sleeps with this nightly. His daughter is grateful for your compassion as she was overwhelmed with grief.
As a UVA employee that doesn't even know you, I am humbled that we have such exceptional staff as yourself taking care of patients.
***
My father, L, was brought here from Harrisonburg via Pegasus and was admitted to SICU. Boyce was our/his nurse. My Dad was dying, and although we knew it we wanted to give my sister and brother time to be here before it happened.
Boyce was very involved and attentive to our concerns and at one point, in my opinion, was heroic in keeping my dad going until both my brother and sister made it here. At some point, I found out Boyce was in the navy reserve and I was in the Coast Guard, so I was giving him a hard time, picking to ease the mood of the room. My father was also in the navy, it helped, don't ask me, I don't know why, just that it did.
After my father passed, Boyce explained what would happen, and on our way back home I received a call from him that he played anchors away for my father.
This man is a credit to the whole department, to the hospital and the Nursing profession.
He made the worse day of my life better.
***
Almost two weeks ago my family went through the most difficult day of our lives. My father had a terrible accident and traumatic brain injury. It happened late at night and he was transported to the Surgical Intensive Care Unit at UVA. His injury was so severe there was nothing that could be done to bring him back. His body was still alive, but his brain was badly damaged.
All the staff that our family encountered were exceptional in their kindness and care for our family in this crisis. I would nominate all of them for the DAISY Award, but I want to highlight the nurse who was with us all through this time. His name is Boyce McClellan. He was amazing in his care for our family during this most difficult time. He gave my sister, my oldest niece and myself one of the greatest gifts we have ever received by keeping our father/grandfather alive when his blood pressure was dropping severely so that we could be with him while his body was still alive. Boyce, hearing my brother checking to see how far away we were, was able to stabilize my dad so that we were able to get there and be by my father's side.
Boyce's gentle kindness as we spent our last hours with our father will always be remembered with the highest appreciation. It was a long and difficult day for all of us, and Boyce was by our side gently guiding us all the way.
My father was in the Navy, as was Boyce, so after my father passed Boyce played the Navy song Anchors Away for my dad. It was the gentle gestures like these where he showed the utmost respect and appreciation for the pain our family was suffering. I can never thank him enough.
Boyce
, view your benefits
Print
Boyce
's Spotlight