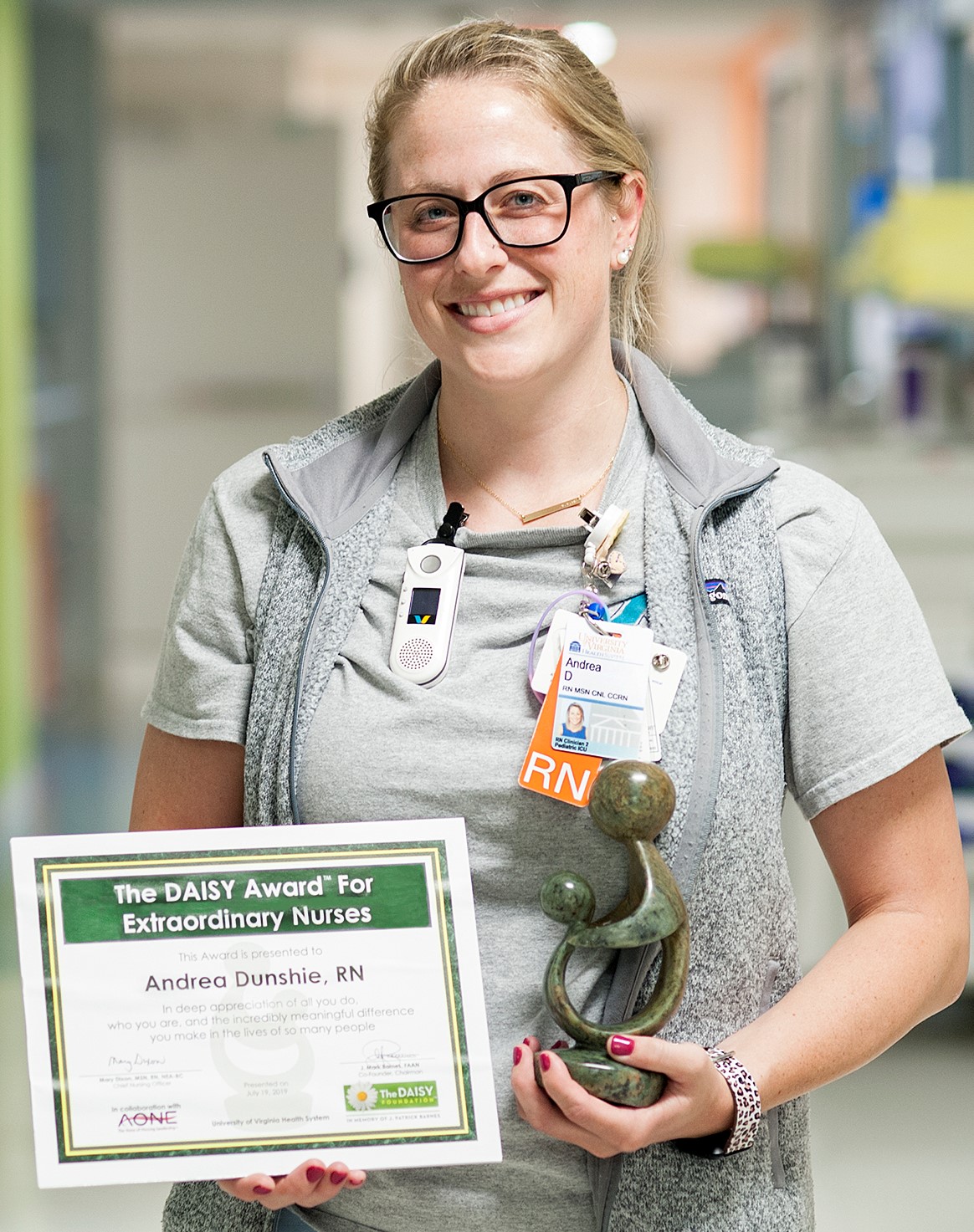 Pediatric Intensive Care Unit
University of Virginia Health System
Charlottesville
,
VA
United States
I was caring for a patient who had suffered multiple strokes and was very sick. The first night I had her, her mother decided to redirect care toward comfort measures, with an end goal of pursuing organ donation if possible. By the end of my second and last night with this patient, she was increasingly hemodynamically unstable and beginning to herniate. Her sweet family was in a very delicate place and needed lots of TLC. They had bonded with every single nurse that had ever taken care of them, but unfortunately, coming into the weekend, none of the nurses who had had her before were back the next day. I had to choose someone new for them who I thought would be the best fit given their tough situation, and boy, did I choose right!
Andrea is not only highly skilled and an excellent PICU nurse, but she is also very compassionate. She met all of the patient's mother's needs, as well as the needs of many extended family members. She facilitated and participated in lots of memory-making, including helping to create beautiful hand molds of each of the patient's grandmothers holding the patient's hand - beautiful works of art that they will have forever. She was able to level with the patient's mother and give her the answers and communication she needed, in as honest and loving a way as possible. She was very well received by this family.
Perhaps the most special thing that Andrea did though was to help coordinate this special little girl's honor walk. We recently started doing 'honor walks' for patient's heading down to the OR for organ donation, where any available staff line the OR hallway to pay their respects and honor the patient and their gift of life. Due to the massive amount of coordination on Lifenet's end in getting all the recipient surgeons to UVA, the patient's OR time was quite late - later than initially expected. Lots of family, friends, and coworkers of the mom had come from near and far to be a part of the honor walk, something they had even come to look forward to since the decision for her to be a donor. However, with the late OR time, most of them would have to leave and wouldn't be able to participate.
That was when Andrea decided to organize a special honor walk. She picked a time when staff from both the day shift and the oncoming night shift could attend, and she herself stayed late to help facilitate it. It was a major undertaking to take such a critical patient on an elective walk around the 7th floor safely, and not something that we've ever done before. It was very beautiful. All available staff from the Children's Hospital lined the halls of the 7th floor, held balloons and flags, and even dressed in as beachy/tropical colors as possible to honor the patient, who was given the hashtag #mermaidsoul. The patient had her honor walk with everyone who came to be a part of it with special music playing in the background. It was very moving for everyone, but especially for the patient's family. They went on to write and say very beautiful things about the staff in the PICU. For Andrea though, I was very impressed with how gracefully she was able to walk into one of the worst imaginable situations and make it the best that she could for the people around her, especially having no previous relationship with the family, as other nurses had. Thank you, Andrea, you are truly a DAISY Nurse.
Andrea
, view your benefits
Print
Andrea
's Spotlight