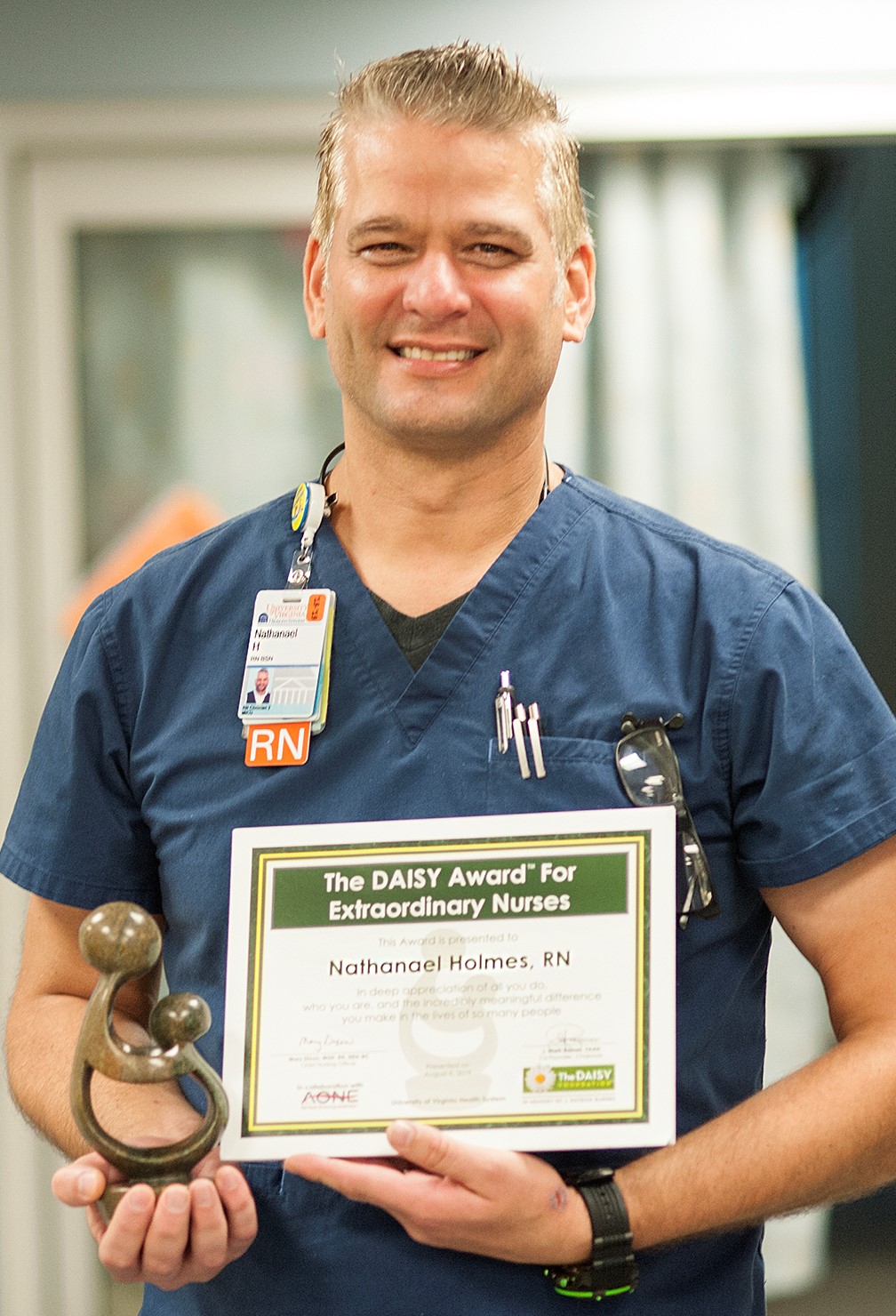 Medical Intensive Care Unit
University of Virginia Health System
Charlottesville
,
VA
United States
The Medical ICU has a very high acuity population, some of whom are chronically ill patients and unfortunately, the MICU tends to become a home to them. With the patient Nate was caring for, this was certainly the case. The patient had been in and out of the MICU over the stretch of a few months in which Nate had gotten to know him. When I came to know this patient, it was unfortunately at the end of his life. Nate was the nurse I received report from. He said that the patient had decided after a long battle with multiple comorbidities that he was ready to stop all efforts in his medical treatment and withdraw life-supporting measures that were in place. As Nate told me the story of this man's lengthy hospital stay, I could see this patient had become very close with Nate and was weighing down on his heart. Nate had told me that he had specifically been taking this patient assignment since his original admission with another nurse on our unit to give the patient a sense of ease and continuity. He told me how hard it had been watching as the patient went through the grieving process as he accepted his own impending death and how he had supported the patient, wife, and family through this.
Nate finished giving me report by telling me that the patient had chosen to be terminally extubated from the ventilator in the morning, meaning the patient would be removing the machine that was breathing for him. Nate had told me that he didn't want the patient or his wife to be alone and that he had tried to pick up a shift in the morning to be with them. If Nate had picked up, it would be 5 shifts in a row, so Nate was unable to. When we went to meet the patient and his wife, I could immediately see the sense of relief on the patient's wife's face when Nate entered the room. He took the time to explain that he would not be back tomorrow morning, but that he would be back the following night. He explained that they would be supported tomorrow while they withdrew care and that he wouldn't suffer and we would make sure he was comfortable. Nate gave his wife a hug and she began to cry thanking Nate for his kindness. Nate told her he'd come in early the next time he worked to check up on them (as we never quite know how long it will take for someone to pass after extubation). Nate said he would be at home praying for them, as the patient recently had expressed his religious beliefs.
After Nate had left for the day, I went back into the patient's room. His wife told me how supported she has felt and how her husband was at ease during this hard time due to support of the MICU staff. She then turned to the family in the room and began talking about Nate and the compassion he showed for them. The patient's son was in the room, and the wife spoke of how his father had been in good hands with Nate. She talked about how Nate had been caring for him the entire time and recently over the last 4 nights. She talked about how he had not only made sure the patient was supported emotionally and physically but that he had made sure she was too. Nate kept checking to make sure she was getting rest, eating, and drinking.
As a newer nurse, I am moved by Nate's genuine kindness and big heart. Nurses like Nate are one of the reasons I love my unit. As his high caliber and respect for his patients hold others to a high standard. Nate is certainly a role model to me, and I am so lucky I work with nurses like him.
Nate's kindness and compassion were on my mind all day. I went and spoke with one of my preceptors regarding Nate, and for ideas on how I could recognize him for the wonderful nurse he is. She then expressed her great respect for Nate and asked that she too write something about him. His work ethic, compassion and genuine care for the patients set him apart. Nate gladly takes patient assignments with either complex family situations or difficult patient needs. I recently shared a patient with Nate that had become a MICU "resident." He was a patient in the MICU for weeks and had many complex care needs. Nate took impeccable care of him and went above and beyond. Nate brought in some bath gel from home and spent 2 hours bathing him, listening to him, playing his favorite music and performing rigorous physical therapy. The patient, who is typically very anxious and demanding, was calm and relaxed when I came in the next morning. The patient told me for the first time in a long time he felt human again! Nate embodies all of the characteristics of what nursing is all about. He listens to patients and adapts his care based on their needs. I am proud to call him a friend and colleague.
I truly believe that Nate deserves this recognition, not only for this one instance of exceptional nursing care but for years of selfless, kind and compassionate care. The MICU is a better place because Nate works here.
Nathanael
, view your benefits
Print
Nathanael
's Spotlight