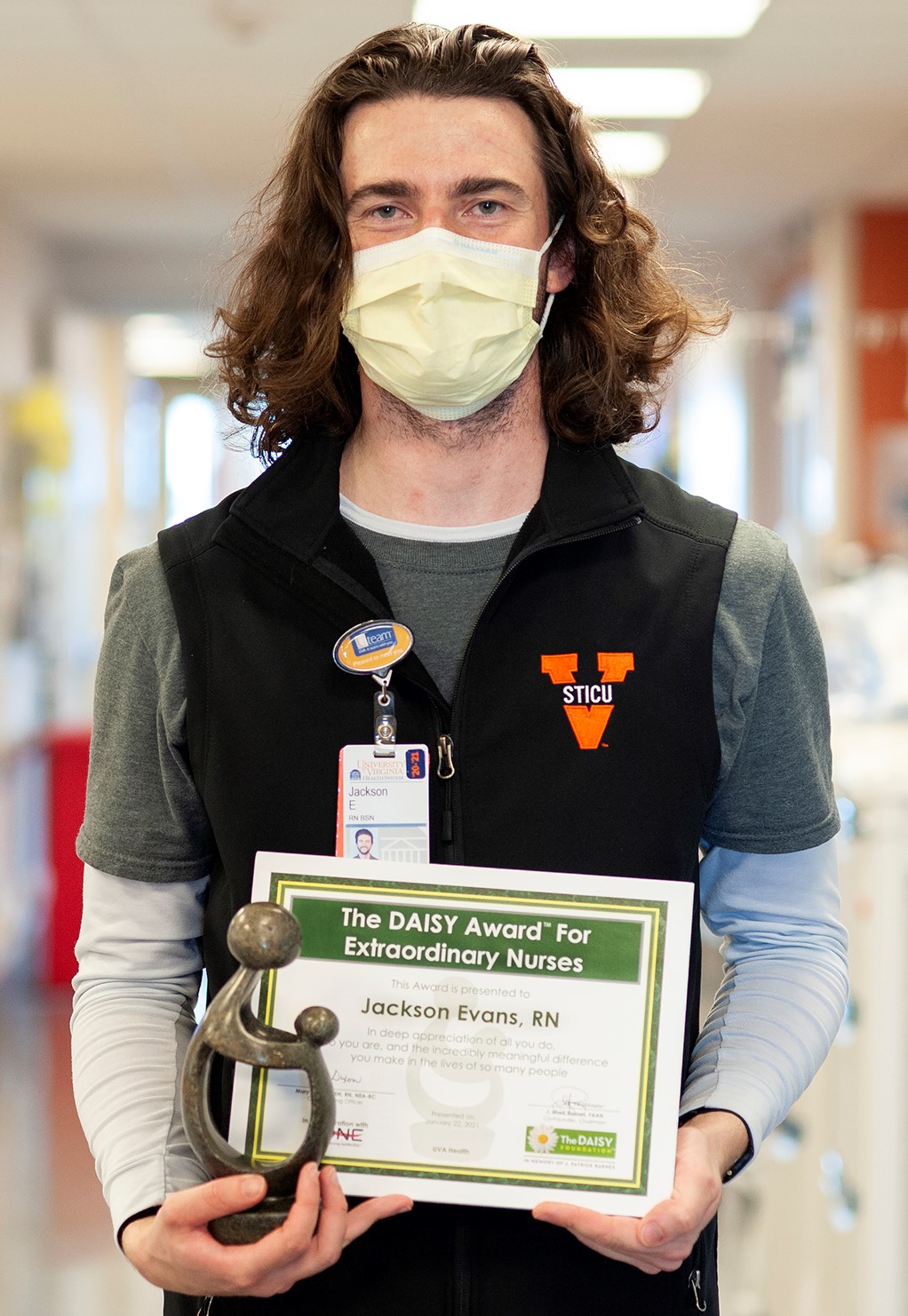 Surgical Trauma ICU
University of Virginia Health
Not only did I realize how lucky I was to have Jackson as a teacher, but how lucky this family was to have someone so capable and compassionate be here this day.
In September, I was nearly two months into my orientation. We were starting to get sicker patients as part of the progression for my learning and on this specific day, we were caring for a young man named Q who was clinically brain dead. He had died tragically following a liver transplant, but was a candidate himself for organ donation and thus was being bridged to a nearing procurement.
Very quickly that afternoon we were notified that Q's procurement would be in the evening and that the team that would procure his heart was already in transit from Ohio. Our LifeNet coordinator informed us of the family's wishes to be a part of his last moments.
All of this was so new to me that I had no idea what to do, and continued to complete tasks for the LifeNet coordinator. Jackson stopped me at one point and helped me refocus, suggesting we give Q a bath, clean him up, and make the setting as low stress as possible. Here we were taking care of such a sick person, and the simplest things were obviously the most important tasks at hand. Jackson drew a warm basin of water and soap, and together we gave Q a soap and water bath. We reorganized his lines and cords, and Jackson took special care to wash his hair and comb it perfectly. His skin was clean, his eyes made soft by the warm water. The room smelled of soft citrus after we applied lotion to Q's skin. This young man looked so comfortable, almost new.
During all of this, my only thoughts were pure admiration. Not only did I realize how lucky I was to have Jackson as a teacher, but how lucky this family was to have someone so capable and compassionate be here this day. Though we shared the responsibility of his care, I looked to Jackson that afternoon for much of my own strength. As I was nearly identical in age and family situation to Q, I found myself overcome with a multitude of emotions. In those moments, it was Jackson who helped me not only acknowledge those emotions but also use them to create an atmosphere of dignity and compassion towards such a tragic situation.
The time came when his parents arrived. You could see them already crying as they walked through the door. You could feel their pain. We greeted them and invited them into the room to see their son. They immediately collapsed in tears. Much to my surprise, their emotions were focused on how great he looked. His father turned to me, tears streaming down his face, and shared how clean and beaming he thought Q looked. With the exception of his breathing tube, he thought he looked exactly like he did before he became sick. After several minutes, his mother commented on how great he smelled, and that she would never forget this smell of orange citrus from this moment. We gave them their time alone, and once together again, Q's parents thanked us profusely for creating such a dignified end to their experience.
At this point, I was in uncharted waters, and though I was uncomfortable, my trust in Jackson and his experience made me feel comfortable learning and exploring such a sacred role.
This moment, this case, was one of the truest examples of why I became a nurse. I have cherished this moment. Though my novice self was at a loss of direction, Jackson and his truly brilliant talent as a nurse helped me explore every dimension of such an important moment in my career, all while overseeing an experience that Q's family will hold onto for the rest of their lives. It brings tears to my eyes every time I think about it.
All this to acknowledge just one of the many moments I have had with Jackson. His compassion and dedication for the patients and families in the Surgical Trauma ICU at UVA are unparalleled. When I think of what it takes to be a nurse, I think of Jackson and the effort he puts in every minute of every day. His peers know well what that means. It has made all the difference in my transition as a new nurse learning from Jackson, and I could not be more thankful.
Jackson
, view your benefits
Print
Jackson
's Spotlight